@joe_kirby’s recent post  makes reference to my book in the context of a wider discussion regarding the ongoing use of lesson observation in the English education system. As all readers will be aware, observation is a hot topic that continues to generate much debate across the profession, albeit often for the counterproductive consequences of its predominantly performative use. The fact that teachers like Joe and others have written numerous blogs about it recently reinforces the idea that it continues to provoke strong emotions across the education sector. In his post Joe selects a series of quotes/extracts from the book in an attempt to encapsulate some of the thematic discussion and the main arguments I present. It’s no mean feat trying to capture some of the key arguments and topics covered in the book’s nine chapters in a blog entry but Joe’s inclusion of the following summarising statement from the book towards the start does a good job of setting the tone:

The high-stakes nature of performance management-driven observation for monitoring and measuring militates against professional development; school leaders must challenge the hegemony of graded observations and redesign observation as a tool for reciprocal learning, decoupled from summative high-stakes grading

For those people who would like to read detailed reviews of the book, there is one here and another here. And, of course, there are shorter ones on Amazon too. Following on from Joe’s blog, I’d I’d just like to add a couple of points of clarification and extend the discussion further. This post is certainly not intended to be a long one, nor indeed going to repeat things I’ve written/spoken about before regarding observation. If anyone is interested in reading my previous work on the topic, you can access journal articles, reports, talks etc for FREE by clicking on my academia.edu web page, where I regularly post my publications/output. Firstly, Joe makes a point about feeling ‘uneasy’ with the ‘prescription’ of the Ten principles of ‘good teaching’ graphic, which appears in Chapter 6 ‘Being an Effective Teacher – Models of Teacher Effectiveness’. I’m unsure if Joe has misread that particular extract but this is what it actually says in the book in relation to the ‘Ten principles’:

Despite the difficulties previously discussed in defining good teaching, this does not mean to say that it is impossible or pointless, as Moore suggested above, to devise a set of ‘guiding principles’. It is one thing to produce a prescriptive list of ‘dos’ and ‘don’ts’ as to what constitutes good teaching but another to theorize about some of its underpinning principles. With this in mind, what might such a set of principles or assumptions comprise?

Table 6.1 below is my attempt to produce a broad set of principles of ‘good teaching’, though not necessarily in a particular order. Table 6.1 is not meant to be an exhaustive list, but should provide a broad framework for discussing the topic within and across institutions. It might also be used as a set of prompts on which to base the development of a more tailored instrument for assessing practice across the institution through the medium of classroom observation and other relevant mechanisms. (O’Leary 2014a: pp. 97-98) 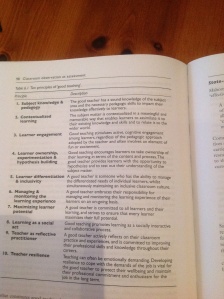 Thus this list of Ten Principles of ‘Good Teaching’ are simply a stimulus for debate and certainly not meant to be used prescriptively. Much of the discussion in that particular chapter of the book explores research into the notion of teacher effectiveness and makes it clear that it is a contested terrain with conflicting findings from a host of international studies. Joe contends that ‘any selective list of what makes good teaching will never be agreed upon’. One thing that is clear from past and current research into teacher effectiveness and attempts to define it is that it is indeed a thorny topic that divides opnions. However, that shouldn’t stop us from discussing it and developing our knowledge and understanding further of the qualities and attributes of the effective teacher. The recent MET project, funded by the Gates Foundation in the USA, is proof of how important an area of research this is considered to be for educators on an international scale. Besides, better for teachers to be engaged in this discussion and actively contributing rather than leave it in the hands of policy makers to decide. I agree with Joe’s point that one of the most important questions we need to be asking is how observation can be used as a tool for improving teaching and a third of my book is dedicated to exactly that focus. I have argued previously here and here that the single most significant obstacle preventing us from doing so is what I refer to as the ‘assessment straitjacket’ that for decades has constrained the perception and implementation of observation in the English education system. Breaking free from that assessment straitjacket is essentially if we are to fully exploit the benefits of observation as a source of evidence.

There needs to be a ‘thinking outside the box’ when it comes to how observation may be used as a source of evidence in the educational arena. Tinkering with prevailing normalised models of observation is, at best, only likely to have minimal impact and offer short-term solutions to longstanding issues. Although removing the graded element would certainly represent a step in the right direction, for example, it cannot be considered a panacea in itself. In a similar vein, recent calls for the abolition of lesson observation from the inspection process are a classic example of ‘throwing the baby out with the bath water’ and as such represent a knee-jerk reaction to a much more complex problem than the one they claim to solve. Ultimately, what both of these strategies fail to address are the deep-rooted political and epistemological issues surrounding the use of observation as a method of assessment. At the heart of any such discussion is the acceptance that the use of observation is not purely an act of pedagogy but one that is underpinned by issues of hierarchical power and professional trust. Until these issues are acknowledged and discussed by education professionals in an open forum, then any attempts at reforming the way in which the sector makes use of observation are unlikely to progress (O’Leary 2014b: pp. 220-221)

Finally, when discussing the reliability of graded observations in his post, Joe refers to the work of @ProfCoe. Prof Coe is often referred to in other bloggers’ posts about observation. As someone who has been researching and writing about lesson observation, I obviously have to keep up to speed with current research on the topic in the UK and internationally, yet I had never come across any research on observation by Rob Coe. Just to make sure I hadn’t missed something, I tweeted him in March earlier this year and as you can see from his response he openly admits to having done ‘no proper research’. The references to Coe’s work are thus based largely on a powerpoint presentation and a blog rather than empirical research. If people are interested in knowing more about current research in the UK – then this research study, carried out in the Further Education sector, is a good place to start as it is the most extensive research into the topic carried out to date.

O’Leary, M. (2014a) Classroom Observation: A Guide to the Effective Observation of Teaching and Learning. London: Routledge.

I work as a Reader in Education at Birmingham City University. Prior to this I was the co-founder of the Centre for Research and Development in Lifelong Education (CRADLE) and a principal lecturer in post-compulsory education at the University of Wolverhampton. I have worked as a teacher, teacher educator, head of department and educational researcher for over 20 years in colleges, schools and universities in England, Mexico and Spain. Much of my work and research is rooted in the field of teacher education, particularly exploring the relationship between education policy and the continuous professional development of teachers. I am well known for my work on classroom observation and am regarded as one of the first educational researchers in the UK to investigate and critique the practice of graded lesson observations. I am also the author of the 'Classroom Observation: A Guide to the Effective Observation of Teaching and Learning' (Abingdon: Routledge 2014). Qualifications: PhD in Education (University of Warwick); MA in Applied Linguistics & ELT (King's College London); PGCE in Spanish & ESL (UCE Birmingham), RSA DipTEFLA (King's College London & British Council Mexico City); BA (Hons) in French & Spanish (University of Southampton) View all posts by drmattoleary

3 thoughts on “Observation rubrics – a response to @joe_kirby”